Monitoring of Pre-natal Diagnosis Technique Act –1994 As Amended in 2003: Towards a National Campaign Against Sex Selection 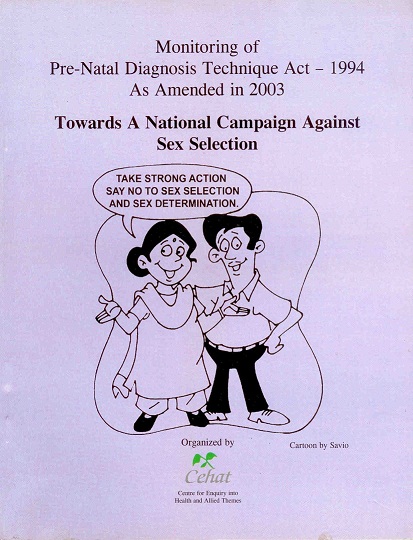 The misuse of pre-natal diagnostic techniques for the purpose of sex selection and sex-determination has led to decline in the country's female population. The legislation which prohibits sex-selection and regulates pre-natal diagnostic testing is the Pre-Natal Diagnostic Techniques (Prohibition of Sex Selection) Act 1994 (The PNDT Act) as amended in 2003. A National Consultation on the monitoring of the PNDT Act, organised by CEHAT, was held between November 27th and 28th, 2004 following the Supreme Court's judgment on the Act. This document is the compilation of the presentations made during this consultation on the status of implementation of PNDT in different parts of India. It is useful for those who are fighting to save the missing girls.