Research - Towards Strengthening Health and Health Care In India

Prawn harvesters from the Little Rann of Kutch (LRK), Gujarat, largely members of the Miyana community, are seasonal migrants from along the coastal areas of Gujarat. These seasonal migrants face many problem with regard to lack of basic services like food, health an education particularly children among the migrants miss education and immunization. This study conducted by CEHAT in collaboration with ANANDI which has a strong presence among the prawn harvesters; is an attempt to document the socio-economic and health condition of the prawn harvesters at temporary settlements along the coast. The study was conducted in 13 temporary settlements spread across Rajkot and Surendranagar districts along the coast of the western Indian state of Gujarat.

There have been many studies on user fee, indicating that the average hospital receipts forms a negligible percentage of the total hospital expenditure and if the administrative costs are deducted then the recovery is all the more meager. There has been evidence from the NSSO, which show that the utilisation of public health facilities has declined in the last two decades. User fee was introduced in India in the 1990’s as a part of Health Sector Reforms and many studies show that levying user fee in public health facilities is an important factor that has contributed to decrease in utilisation of the public health facilities

The study design is finalized and Preliminary information has been collected by visiting the municipal hospitals and informal discussion with the staff has been carried out to develop tools for data collection.

Concern raised about User Fees in Public hospitals
The Government of Maharashtra hiked User Fees in public hospitals through a Government Resolution (GR MIC-2006/305/CR-33/06/Administration-2 dated 30 December, 2010) December 2010. CEHAT has been corresponding with the Department of Medical Education and Research regarding the problems with such policy, in the context of an underfunded healthcare system, which serves a lot of poor patients. The two Government Resolutions from 2001 and 2010 which will show the quantum of hike in user fees charged at the hospitals are attached. Also, part of CEHAT's ongoing correspondence with DMER is attached, for clarity... Letter correspondance

POLICY BRIEF - Punishing the poor? A look at evidence and action regarding user fees in health care... Read fulltext

Objective The present study examined the spatial growth of public and registered private health facilities in selected cities of Maharashtra. The mapping method is used to highlight the availability of private/public facilities in these cities. 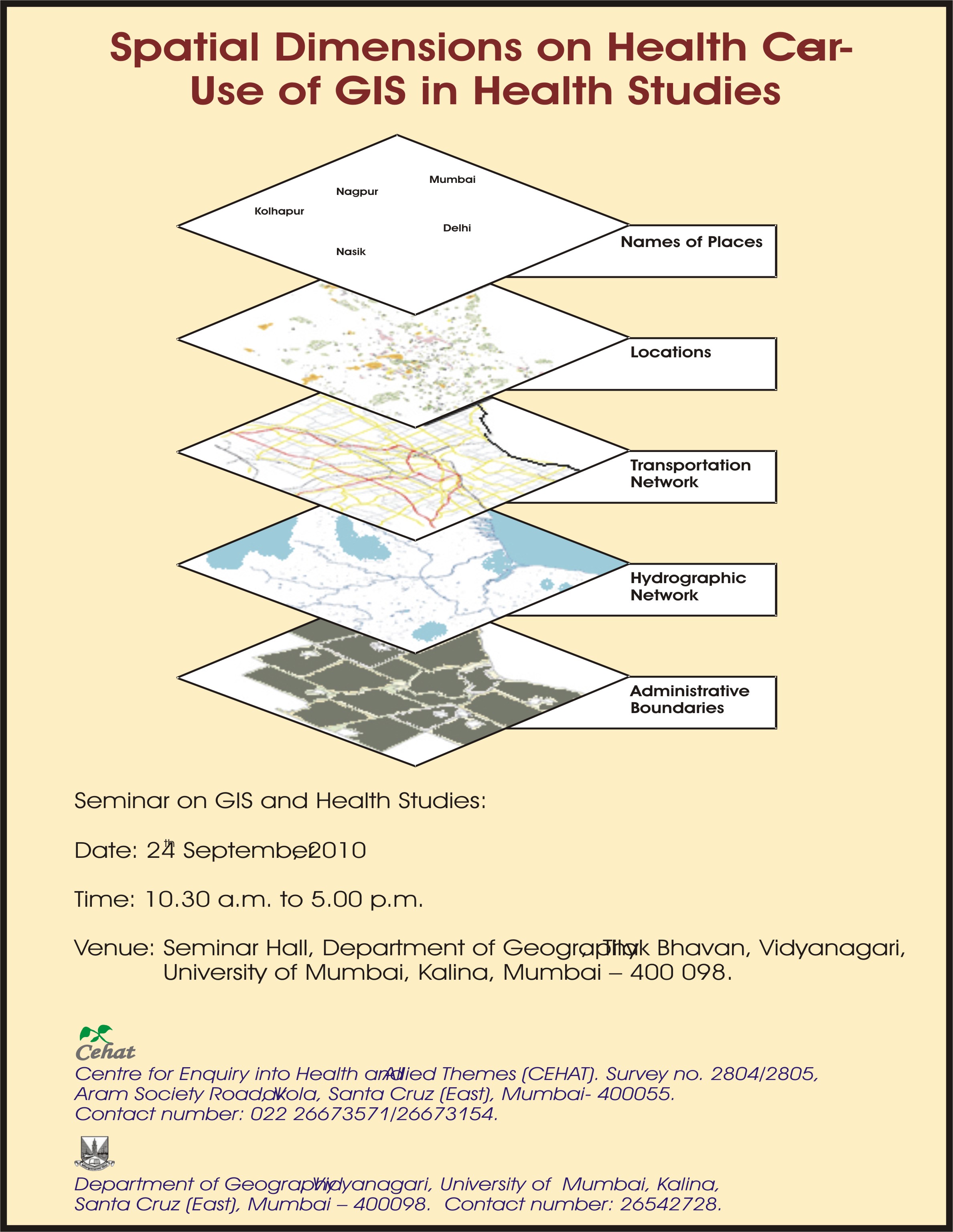 The use of Geographical Information system (GIS) in the field of health research is increasingly becoming important. GIS can be effectively used as location technique for analysis for decision making in relation to optimum gainful utilization of available medical resources. The seminar was organized in collaboration with the Department of Geography; University of Mumbai. The aim was to discuss the prospects and future development of GIS in spatial health and health care management.

The discourse around Public Private Partnership is complex and attracts research studies that are largely based on case studies. CEHAT organized a two day Conference ‘Emerging Health Care Models: Engaging the Private Health Sector’ on 25th and 26th September 2009.India has witnessed an increased number of Public Private Partnership initiatives in the health sector, each of them with their unique setting, approaches and issues. The Conference was rolled out with the basic aim to create a forum for the encouraging the display of debate and discourse in the field of PPP in health.

The conference invited papers on any of the following themes: ... Read more

The changing face of HIV/AIDS shows that more women are getting affected by the disease as compared to men. Women are biologically, sociologically and culturally more vulnerable and this is also the main reason for paediatric transmission of HIV/AIDS i.e. from mother to child. There is evidence that reducing mother to child transmission is the most successful intervention and a cost effective approach to manage paediatric cases of AIDS. The National Aids Control Organization has set up Integrated Counselling and Testing Centres (ICTC) within the public health system. While there are studies done elsewhere, there is none in India. Research elsewhere shows that fear of violence, social discrimination, coping with the diagnosis are some of the reasons for non acceptance on ICTC.